Autism Connection’s team joined forces with a slew of dedicated volunteers at the 2022 Pittsburgh Marathon.

It was 6:00 in the morning, and we were surrounded by water; gallons and gallons of water waiting to fill paper cups. There were heavy clouds weighted with water above us. Under Fluid Captain, Norm’s, direction, volunteers quickly assembled paper cups, filled them, then placed cardboard slats on them so we could layer the cups in stacks three layers high.

We were cold. Large droplets slowly slapped the tables. Norm handed out rain ponchos with a kind, insightful smile, “You’re gonna need this.” 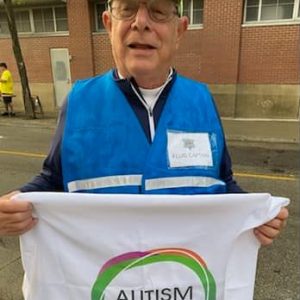 We braced for runners and rain. Hand cyclists whizzed past so quickly some volunteers thought they were motorized vehicles. Then the first marathon runners glided by. It was captivating, and we seemed to lose awareness of the rain pellets.

The lead runners moved with seemingly little effort. Those that followed showed signs of struggle and determination as some reached for cups of water. Each captured cup was a triumph.

We were soaked. There was a quick streak of lightning and a thunderclap, and we braced for more. But when the clouds released, a thunderous rumble of cheering voices burst through the deluge. The harder it rained, the harder we cheered. And the runners pushed forward.

But that’s what the autism community does. We acknowledge and overcome obstacles. We circumvent barriers and face challenges head on.  We accept the downpours and try to make the best of them, with the belief they will let up at some point.

And sometimes we cheer as we persevere.