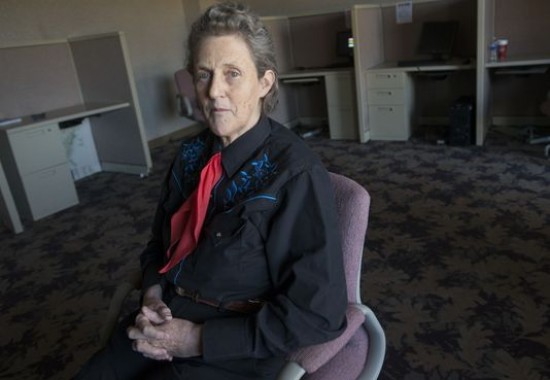 Grandin has written more than a dozen books on autism. She is a professor of animal science at Colorado State University and is known for developing corrals that relieve the stress on cattle being led to slaughter. More than half the cattle handled in the U.S. use Grandin’s invention.

Autism and cattle seem light years apart, but she was making a point.

“I was exposed to cattle as a teenager,” she said. “Students are interested in things they are exposed to; it’s that simple.

“I’m really concerned that our schools have taken out most of the programs that involve skills and trades — cooking, sewing, welding, woodworking, mechanics. We have a huge shortage right now of diesel mechanics, auto mechanics. And a lot of these kids with autism — say they have a minor speech delay, and they’re kind of quirky and nerdy and socially awkward — could do really well in these fields if they were exposed to them. Instead, many of them are shoved into a corner somewhere, and they are never able to flourish or find a career because about the only thing they are ever exposed to is video games.”

Autism, a complex neurodevelopment disorder that affects one in 88 children in the U.S., remains widely misunderstood, Grandin said.

“The reason is because it involves a wide spectrum of how much people are affected by it,” she said. “We are talking about Einstein, who had no language skills until he was 3 but was brilliant, to someone who has a severe intellectual impairment.

Grandin said the best advice she can give parents is this: “If you have a 3-year-old who isn’t talking, the worst possible thing you can do is do nothing. Too many parents go into denial. You have to work with your kid, get him the help he needs.

“My condition was severe when I was 3. My parents hired a speech therapist to work with me. I had a nanny who played ‘taking turns’ games with me. And I was mainstreamed into normal kindergarten.”

Grandin waited patiently Monday as parents and teachers from across the state stood in line to pick her brain.

Michele English, 38, of Laurel has a 19-year-old daughter with Asperger syndrome, which fits in the autism spectrum. Those diagnosed severely lack social and verbal skills.

“Each child is different,” English said. “What works for one doesn’t work for another. Dr. Grandin encouraged me to keep seeking help. If one doctor isn’t working, go to another. Just don’t give up, even if it means looking out of state. And I will. My daughter is my world.”

Shane Chandler, a speech pathologist, was one of six staff members of the Laurel city school district to attend the conference, including Maddox Elementary principal Ruby Lovett.

“We have a 6-year-old boy who is autistic,” Chandler said, “and we came here seeking ways to do anything possible to help him get on track. Our principal has already said on the drive back to Laurel we are going to talk about what we all learned from Dr. Grandin today and formulate a plan.”